What is “organizational culture” and how does it apply to teamwork?

There are some cultures that thrive on hard sell. Like car sales. Specifically low end used car sales, and mattress sales. That’s the culture they thrive on. That’s not a culture that I personally like. Another culture could be one that thrives on working insane hours. That’s what they have to do to get the jobs done. So that creates a culture of that. When I used to do rush hour traffic reporting, our culture was such that we were in an extremely high energy and fast paced environment. The faster the pace, the more adrenaline, the more we thrived. All of these are different cultures. In many cases employees thrive on a specific type of culture.

Now, a true winning culture comes about because people want to go there, they are drawing in high grade talent. Google for example. I read that Google gets more job applications in one day than the average Fortune 500 company gets in a year. They’ve got a culture that many believe they want to work there

Let’s look at some other organizations that have winning cultures and what they represent.

Marriott Hotels. Their culture comes from the founder, JW Marriott, and what he called a “spirit to serve.” The Marriott organization started as a root beer stand in 1927 in Washington D.C. In the summer of 1927, they served root beer floats. By the fall of that year, they realized that if they wanted to serve their customers better, they needed to have hot food because nobody was going to stand outside in Washington DC’s winter temperatures to drink a root beer float. So they created a Tex-Mex line of food that Mrs. Marriott knew how to prepare. That developed into the Hott Shoppe Restaurant. All throughout their development, from 1927 until JW Marriott retired as CEO, they were about the “spirit to serve.” His son, Bill Marriott, took over and changed the direction of the organization. In other words, he changed the mission from restaurants to hotels. In 1957, Marriott opened their first hotel and by 1972 they had 27 hotels. Today, Marriott owns over 4000 properties. But everything they do is still centered around the “spirit to serve.” 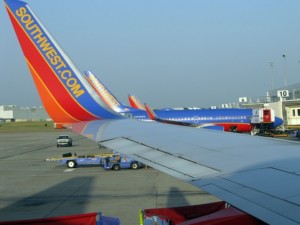 Southwest Airlines has an organizational culture of fun. They believe in making the travel experience at least palatable. Their flight attendants will tell jokes, they’ll do exercises.

I’ve actually seen Southwest Airlines do this on an airplane. They got everybody’s attention and said, “Hey, it’s little Johnny’s 7th birthday. Now we can’t light candles on the plane, but we can sing happy birthday in a very special way. So we’re going to ask everybody on the plane to close your window shades if you’re on a window seat and then I’m going to ask you all to reach up and push your flight attendant call button because that lights up orange. And we’re going to turn all the lights on the airplane off And we’re going to sing happy birthday and he’s going to have all these candles.” See, they are about creating an experience for their customers. Their culture is about telling jokes and having fun, it’s about joking with the customer. Their culture is also one of saying, “If we take care of our employees, our employees will take care of our customers.”

Now, teamwork comes into that because an individual must commit to the team’s culture. There has to be a defined culture set, like Marriott’s “spirit to serve.” They know what it is.

For example, anyone applying for a a job at Chick-Fil-A has to have three interviews before he or she gets hired. If they are a student, they must maintain a 3.0 GPA to keep their job. So, that is part of their culture. They are looking for people that have the same values, same beliefs.

Let’s set aside religious beliefs for just a moment. I walked into a Chick-Fil-A one day and placed my order at the counter. I gave the cashier my money and my change due popped up on the register. It said “$6.66.” I made a little comment, “Ohhh, that’s scary.” There was a 17 or 18 year old young man behind the counter. He said, “Not to worry, Sir. We’re a Christian values restaurant. We’ve already taken care of that. But to help on the other side, here’s a penny,” and he reached into his personal pocket and gave me a penny out of his pocket to make the change $6.67.

Winning organizational cultures are doing the right thing based upon their culture without having to stop and think about it. People who succeed in those places share the values of that culture.

In the movie, Miracle, starring Kurt Russell as Herb Brooks, during a scene early in the movie, the assistant coach Craig Patrick, when looking at the roster Herb had picked on the first day of training, said, “Hey Herb, you’re missing some of the best players.” He said, “I’m not looking for the best players, Craig, I’m looking for the right players.” And that defines team chemistry. Team chemistry is what drives the team and organizational culture.