Teamwork in the Workplace

What skills are necessary to promote real teamwork?

Teamwork skills basically boil down to behaviors. There needs to be a flexibility, an adaptability among all team members. Teamwork skills truly involve give and take from everyone. Understand that not everybody is going to see the same thing the same way that you do. There also has to be a point where the greatest skill is being able to set aside a personal agenda for the betterment of the overall team. Everyone on the team must be focused on the end result for the team and not their own agendas. 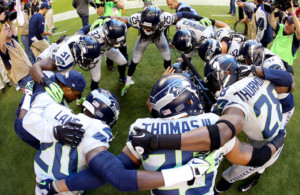 Think about it this way. On the NFL roster, at game time, there are 53 players, which includes up to 8 players on the ‘practice squad’. This translates to 46 active players at any football game. That includes special teams, offensive teams, defensive teams, and all of that. That’s just the players. That doesn’t count the coaches or the support staff. They call it a football team but really it’s a football organization with multiple teams built in. For your immediate team, you have to be willing to set aside your personal agenda (if you are a defensive lineman you want to get the sack), set yourself aside so that you can help somebody else get the sack. The betterment of the team wins.

Great teams (not good teams) take the extraordinary talent of all of their players, and use it inside of a system that is designed for the betterment of the team. That is how great teams win championships. Whether we are talking, sports, volunteer organizations, or the workplace, teamwork skills are critical in achieving success.

It’s the same thing as being able to set a pick in basketball, so that somebody else can get there. Set aside your personal agenda so that the team can better benefit from it.

Another teamwork skill is volunteering for new assignments. Now that’s going to sound counter intuitive to what was just said. I believe that, if a person volunteers for new assignments, that’s going to broaden their own personal horizons. When they broaden their own personal horizon, they start to get a better value of themselves. They also broaden the capability of the team they are serving and they start to get better for themselves and then they are likely to move up and out. Yes. There are many organizations that have a high positive attrition rate because people come in at an entry level position, prove themselves, work very well, and move up in an organization pretty quickly. In baseball, that is called the minor leagues. Great organizations consistently recruit, train, and promote from within.

You may be saying to yourself, “But that’s thinking about yourself and not thinking about the team.” No. Because if people can see that, the whole team starts to build better, everybody starts to focus better.
Let’s say, the average person today entering the workforce, whether it’s right out of high school, or with a PhD., they are likely to have upwards of seven careers. Not jobs. Careers. So while we’re working on a team, we have to volunteer for new assignments, so we can help that team grow. By us volunteering to grow, we can bring that wealth of knowledge back to the team, then we can help the team flourish. So, while volunteering for new assignments sounds selfish, it’s not. Provided that that person is still part of the team.

Related articles: Teamwork in the Workplace, What is Teamwork?, EffectiveTeamwork, Examples of Teamwork