Previous Next
What Is a Team – And Who’s on YOUR’s?

What is a team?

When many people think about a team, they immediately think about typical sports teams such as baseball, football, basketball etc., but track and field is not one of them.  What is a team? A quote from the incredible Wilma Rudolph helps us understand the power of a team.

“Regardless of what you do in life someone else helps you.” –  Wilma Rudolph 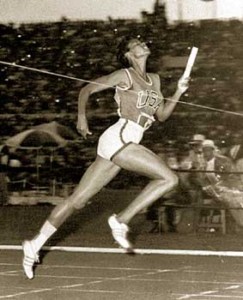 Wilma was born prematurely in the little town of Saint Bethlehem, Tennessee, weighing just 4.5 pounds.  Because of racial segregation, she and her mother were not permitted to be cared for at the local hospital.   Almost from birth she was challenged with sickness; measles, mumps then with scarlet fever, chicken pox and double pneumonia.  Then, when it was discovered that her left leg and foot were becoming weak and deformed, she was told that she had polio.

Doctors told her mother that Wilma would never walk.  Her mother would not hear of that and, twice a week she took, Wilma over 50 miles to the hospital at Fisk University in Nashville until she could walk with the help of a brace.  She was given physical therapy exercises to do at home.  At home, it took a team to help her.  Everyone, including all of her brothers and sisters, helped and encouraged her to be strong.  Through this time she was teased relentlessly at school and never felt like she belonged or was accepted.  Finally, after nine years of intensely working to walk, at the age of 12, she was able to walk without the use of any brace, crutches or corrective shoes.  It was at that point that Wilma Rudolph made the decision to become an athlete.

As she continued training, she became faster and faster and at five feet eleven inches tall she admits that she was never the fastest out of the starting block but once she got moving she became known as “The Tornado.”

In case you are not familiar with Wilma Rudolph here is a little background:

Everything that Wilma Rudolph accomplished was accomplished with the help of her team – including her entire family, coaches and, of course, her track and field teammates.  So the next time you think you did it – stop and think about those who came before you, those who laid the ground work as well as those around you and be sure to give them the credit they deserve.