Look no further than the U.S. Basketball Team during the World Championships in 2006. With a super successful coaching staff and a team full of National Basketball Association (NBA) stars, 12 to be exact, they finished third in the world games, losing to Greece, a team with not one NBA player. Sports reporters from around the country wrote headlines like, “Show me a team of misfits playing like ‘a team’ and they can beat superstars any day.” 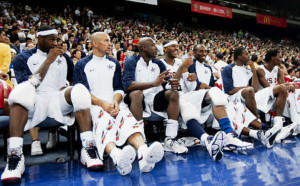 Failing all-star teams aren’t just a sports theme; they have been a challenge facing businesses for years. Companies want a super-star leadership team and end up tumbling. Look at Enron; superstars from the top down, and what happened there?

Generally speaking, someone is selected to an all-star team because of the talents displayed in the “work” environment. This can be a sports field, a sales industry, or a standard office environment. But having a team of all-stars doesn’t always result in a winning team culture.

In theory, all-star teams should be ultra successful. So why do many fail?

The first sign of an internal breakdown is “me” centered language, which is not healthy to accomplish the ultimate goal. Often this occurs in the subconscious mind and is never noticed. In the workplace the language typically sounds like, “I think it should have been done this way,” or maybe, “I just don’t get it.” One of the biggest offenders is the phrase, “It’s not my job.” These are all “me” statements because they revolve around one person rather than the team. Every team goes through a development process. In the beginning, each member is about his or her individual performance and, as the team matriculates, it becomes more about the whole of the team.

As a team begins to trust and respect each other, the process moves more smoothly. A successful leader focuses on the communication of “we” and not individual success or failure. Once the mind begins to process the difference in internal language, the external language follows suit. In a team environment, it’s what went right or wrong not who succeeded or who caused the mishap.

When a team performs at peak levels, everyone feels as though they were an integral part of something successful. Success allows the team to experience more focus, cooperation, productivity and impact throughout the entire organization, as well as to their customers and vendors.

Teamwork is not about getting along with everyone because, let’s face it, that will never happen. If we understand another person’s behaviors, and adapt ours to a more team-centered approach, we can become better producers. That is the little secret of playing nice in the sandbox and developing a winning team culture.