Generational Leadership Challenges in the Workplace

Previous Next
Generational Leadership Challenges in the Workplace 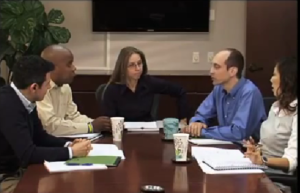 Jason is an entry level manager/leader and was interviewing several candidates for a front line position at the bank he works in. As he reviewed the next e-application, Jason was shocked at what he saw. This applicant had attached a letter of recommendation. Normally, this would not necessarily seem rare or unusual but in this case it was. You see, the letter of recommendation was from the applicants parents. That’s right, the parents.

For those known as Generation X, this is going to drive you crazy. And it is happening more than you might think. Carol recently had to discipline an employee for poor performance. She did everything by the book, in private and in a neutral location. The employee seemed to take it in stride. The next morning Carol received a call from the employee’s father requesting a conference. What is happening? Have we raised a generation of cry babies? Maybe!

The tough part is that this is just the beginning. We are now at a point where some businesses have up to four distinct generations in the workplace, all at the same time:

Generation M – Born between 1991 to present

Generation Y is the first generation to have grown up with computers throughout all of their school life.  Many of these people have never had a land line phone; they only use cell phones. They prefer to communicate electronically, either by email or text messaging.

Generation M (millennium or mobile) is the first generation to have everything in their life basically mobile. This generation prefers to communicate via text messages. I asked a 14 year old girl one day about how much she emails and her response was, “Emailing is so 20th century.”

Think back to your childhood. At the age of 13, how far did you ride your bike from home? Most Baby Boomers came home from school and took off on their bike and came home for dinner. In between, they could have been 3-5 miles from home and no one worried about them. Today, parents will not allow their children off the street until they hit 13. Are they overprotective? In many cases the answer is no – it is just a part of society today. Yet it affects how those late Generation Y employees and the new Generation M employees think.

Generation X was considered the first latch key generation. They came home from school and did homework, completed chores and maybe even started dinner. They truly were self sufficient. This makes it difficult for them to understand the behavior of the younger generations. This generation has expectations different from any generation in the past. They expect to be shown how to do everything where Generation X just figured it out. Do you see the challenge here?

What makes this even more bizarre is that the Baby Boomers will sometimes side with and want to help the young ones out. Why? Simple, they see their children here. This makes for a tight squeeze on Generation X.

What can we do? Generational leadership requires the leader to set expectations or ground rules for the team right up front. Employees of all ages typically want to do a good job and will usually play by the rules as long as they know what those rules are. Unfortunately, many organizations fail to set ground rules and express expectations clearly.

What is the difference between ground rules and “regular” rules?

The times they are a-changing, and we can either change with them or get left behind. If you are a baby boomer let me ask you – other than to your kids, how many text messages did you send last month? Now ask someone in Generation Y how many he/she sent.

Are you ready to lead this diverse team?