When was the last time someone in your organization passed on recognition and said that someone else deserved the accolades? As I travel the country I am finding extremes of this. Some organizations have a culture where competition thrives among employees and teamwork is basically non-existent. This lack of team culture filters down and, in many cases, employee turnover, productivity, and morale suffer greatly. 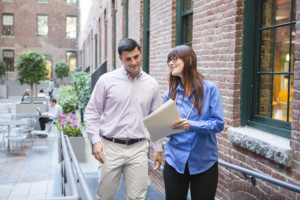 On the other side of the coin are organizations that have taken the time to develop a culture of teamwork and collaboration. When I ask these organizations if it was always like this I am often surprised by the answers. In many cases, collaboration was not always there. Instead, it began with a small group working together and waiting for ideas to spread both up and down the organization.

In one organization, Derrick was the Senior Vice President in charge of about 75 people in his division. They were having difficulty communicating, supporting each other, and simply getting along. In some cases, there were verbal threats and disrespect of colleagues.

Derrick recognized that they needed to change the culture and that this culture needed to begin with him. Once Derrick modified his own behaviors, he began to work closely with his immediate team, holding them accountable, and they then modified the culture on their teams until it transferred down to the front line. This did not happen overnight; in fact, this culture shift took about 18 months. Through the process, several people resigned and new employees were hired.

As the shift progressed, Derrick noticed the behaviors adapting, morale improving, and productivity increasing. As all this was happening, Derrick noticed one added benefit – his division’s profitability increased proportionally.

What can you do on a small scale to get your colleagues to think like a team and work like a team? Have everyone on your immediate team brainstorm and write down their suggestions privately to improve teamwork and collaboration. Do not use names or specific examples of past behaviors. Rather, ask what they would do to change the current culture.

One powerful strategy is to have everyone become a mystery shopper for several weeks. Then have short weekly meetings and have everyone report back what they noticed about teamwork and collaboration. Focus on the really good and really bad teamwork. Then take time to evaluate how those behaviors impact your team in both positive and negative ways.