Previous Next
Cohesive vs. Dysfunctional Teams

I recently attended a conference where Patrick Lencioni, author of the national best-selling book The FIVE Dysfunctions of a TEAM was the keynote speaker. During his program, I found myself thinking about how to turn those dysfunctions around in order to develop a cohesive team. 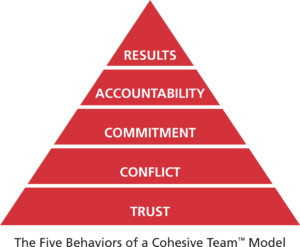 The functionality of almost every team falls somewhere between Dysfunctional and Cohesive. The question is, how close (or far) from Cohesive are you?

In many ways, a dysfunctional team is like an iceberg. We may see the behaviors associated with dysfunction, but we may not see the underlying causes of those behaviors because those causes and issues are “below the waterline.”

The critical employee issues that exist below the water line include:

The Absence of Trust

This type of trust is called vulnerability trust. When everyone on the team allows themselves to be vulnerable to each other, the team can begin the move to cohesiveness.

To reach this level of trust team members must get to know each other on a personal basis. When they become comfortable enough with each other that they are able to express themselves without fear of censure or ridicule, team members can focus on productivity rather than protecting themselves.

Without this trust the team cannot have healthy conflict.

The Fear of Conflict

Conflict without the trust we just discussed becomes political. Effective, healthy conflict, however, is more appropriately considered ideological. The challenge is that most people tend to avoid all conflict because they don’t want to hurt the feelings of others on the team. Therefore they sit in silence during meetings rather than expressing their thoughts and feelings in order to avoid potential conflict.

Ideological conflict will “feel” more comfortable that political conflict and can be quite productive to the team. In some situations, “mining” for conflict within the team can be quite effective. This can be accomplished by having two team members purposefully take opposite sides of a situation and enter into a debate during a team meeting. Leaders experience a special challenge here because they may wish to stop the debate (conflict) too early in an effort to protect team members

If a team fails to engage in ideological conflict, then they will fail to commit.

The Lack of Commitment

Commitment means that, even if a team member does not agree with a decision, they will fully support the decision and do their part to move the team forward successfully. If the requisite trust exists, and conflict within the team is healthy, the team member will know that their voice was heard and feel confident that the team reached their decision fairly.

If people are not committed to an idea, and the success of the team, they may become passively committed. Passive commitment means that the team member will not be actively engaged in success. Their passivity may cause deadlines to be missed, work quality may suffer, and they could potentially sabotage the entire project.

Two significant challenges hold teams back from gaining total commitment. The first is when the team attempts to get a team consensus. The second challenge is when the team strives for perfect clarity. Successful teams understand the dangers of trying to reach total consensus and perfect clarity. Great teams pride themselves on being able to unite behind decisions and commit to clear courses of action.

The easiest way to move towards total commitment is to take a few minutes at the conclusion of a meeting and explicitly review the decisions that were made. Agree on what needs to be communicated to other stake holders that were not present in the meeting about those decisions. This is a great opportunity to make sure everyone is clear and “on the same page.” At least 10 minutes at the end of a meeting is usually sufficient, so be sure to budget for it.

Without commitment, we cannot hold others accountable.

“Accountability” is a very overstated word that sometimes loses it true meaning. The clear definition here is, “The willingness of team members to confront their peers on performance or behavior issues that might hurt the team.”

The challenge is that many members are unwilling to call others out on performance and, instead, continue to tolerate interpersonal discomfort. Quite simply it is easier (on the surface) to opt-out and avoid the difficult conversations.

The key here is structure. Develop a set of performance goals, standards, and core belief statements. Then, make sure they are reviewed regularly. It has been said that repetition is critical and that it some information must be repeated as much as seven times before it truly becomes understood.

Great teams utilize core value statements as truth serum in decision making. A little structure goes a long way toward helping people take action that they might not otherwise be inclined to do. This is especially true when it comes to giving colleagues feedback. Team members should have regular meetings and provide progress reviews on each other.

When peer to peer accountability is missing, team members can never take responsibility for results.

When the first four dysfunctions are overcome, the results will follow. Great teams understand, pay attention to, and proactively work to overcome these dysfunctions, in order to build cohesiveness.