Weathering the storm: Moving positively through disruptions in organizational development

Previous Next
Weathering the storm: Moving positively through disruptions in organizational development

John was a member of a developer team that had worked smoothly together for nearly two years. Each person on the team had a specific set of programming and development skills and knew what task they needed to perform in order to complete their piece of a larger app development project. The team was full of strong performers who consistently met their benchmarks on time, and even more importantly, they enjoyed working together.

Of course, as happens with many strong-performing workplace teams, upper management decided to shift some of the developers on John’s team to other teams, hoping to increase the performance of other teams. This wasn’t an unusual move, particularly at a technology company where goals can shift with the company’s overall business outlook. However, it meant disrupting the established structure and level of organizational development for the team John was part of. Three of the most experienced developers were assigned to other teams on the same project.

Even though the reassignments were positive—everyone stayed on board and even were on track to be team leaders—John’s team now had to adjust to new, less-experienced members and a reshifting of responsibilities to compensate for some of the skills that the departing team members took with them.

A strong team core and a sense of purpose are important for a workplace team to deal with disruption and move forward. 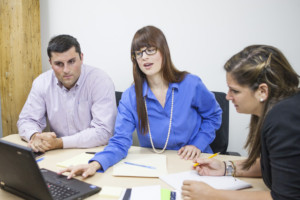 For John’s team leader, Bess, it was important to recognize that after such a large shift in members, the team needed to be re-formed. Everyone, both experienced and new members, had questions about how their roles would change. Bess held a meeting with the team to introduce the new members and enumerate their skills and expected roles. She answered questions from John and other members about how their roles would change. And she re-emphasized the ground rules of the team so that everyone understood what was expected of them.

Because John’s workplace team had a strong core and a sense of purpose—accomplishing specific development tasks for a clearly defined project—it was not hard for Bess to refocus the team and get them back on track quickly.

Bess essentially went back to the first of four steps in building a strong team, what I call FORMING. Even though the team was already well-established, the disruption caused by the personnel shift left John and others uncertain about their exact roles within the team. By introducing new team members and reiterating the team’s purpose and roles, Bess dispelled many of the members’ uncertainties and established initial trust between everyone on the team.

In future posts, I’ll talk about the four stages of team matriculation. FORMING is just the first of these, and you’ll want to know about the rest.

Don’t want to wait to find out the four stages of team matriculation? My book, “One Team, One Dream” breaks down these stages and guides leaders in building an effective team.