Teamwork – It Really Does Make the Dream Work

Previous Next
Teamwork – It Really Does Make the Dream Work

The third week in May is a very special week in Annapolis, MD. It is Commencement Week for the United States Naval Academy midshipmen and, every year, the Blue Angels rehearse on Tuesday and perform on Wednesday afternoon.

Every Blue Angel performance is based around a center point. For this event, the center point was on the Severn River, which borders the US Naval Academy. This is where we took our seats, and awaited the show’s beginning. 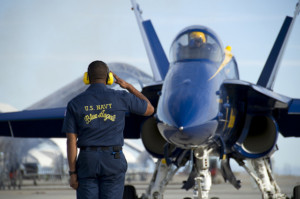 If you have never experienced this amazing team in action, you are certainly missing a demonstration of true teamwork at its best. Watching and hearing the F-18 Hornets approach in and of itself is awe inspiring. Watching them approach from opposite ends of the center point at maximum velocity with minimal separation is nothing short of breathtaking.

The level of trust that the pilots have with each other is understandable. The level of trust that they have with the enlisted men and women who maintain their aircraft, and support the team is equally amazing. For the Blue Angels, every mission is critical. A successful performance is a matter of life and death. While everyone has his/her role to play on independent teams, each team realizes they are part of several other teams, and that each team must collaborate with all other teams to make any Blue Angels performance successful. While the pilots are often credited with the success of the performance, let’s not forget the rest of the teams that also make significant contributions.

This same concept holds true in every organization. Many times, those at the top, or most visible, get the credit for the team’s success. Don’t forget the behind the scenes teams that also contribute to the overall success and should be recognized.

Take a moment and think about the team(s)you work on every day and answer the following:

Being able to answer all these questions positively will ensure that you, and your team, is truly making the dream work.