Organizational Culture: One Bad Apple Can Spoil the Whole Bunch

Previous Next
Organizational Culture: One Bad Apple Can Spoil the Whole Bunch

In 1970, the bubble gum group The Osmonds released a number one song called One Bad Apple, where they sang “One bad apple don’t spoil the whole bunch girl.” While they may have been right for love and the 1970 teenager, for today’s team, one bad apple can definitely put a kink in your team

Several years ago, I was delivering a team and service training session for a client in Newport News, VA. We began at 8:30 and, as with any day of the week, things happen and a couple of people came in a few minutes late. One young woman walked in at 8:36. Like the few others before her, I reached for a workbook and walked over to give it to her. She snapped the book right out of my hand and said, “I don’t need no F-ing book. I was told I have to be here, but I don’t have to participate.” She then walked to the back of the room and took her seat. As the morning progressed, I noticed she was looking at the book although definitely not acknowledging there was a training taking place. 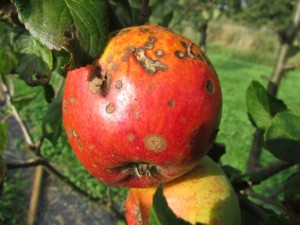 After lunch, I had everyone change seats to mix the room up a bit. The woman in the back of the room actually moved one seat to her right. Maybe I was getting through to her. WRONG! About 10 minutes later I put everyone into small groups of three for an activity. I asked her to now work with two others, and she said, “I told you I was not going to participate.” “You will be letting your team members down then”, I said. She replied, “That’s their problem.”

Once the day was finished, the three-member management team and I sat down for a workshop debrief. In this session, I had to ask why this woman is still on the team, and the response from the managers was, “She is our best producer.” When I asked how their overall turnover is on the team, I was told it was fairly poor and that several people a year move on. I then asked if they thought this one person was a significant part of the problem for the excessively high employee turnover. All I saw was puzzled looks on each of their three faces.

We spent the next hour or so talking about how they can hold this employee accountable and either improve her behavior, have her leave on her own or, if necessary, offer her career redirection advice. The process took over six months and after being placed on a performance improvement plan, the employee resigned. Over the next two years, the overall employee turnover was greatly reduced. This was a classic example of one person acting like a cancer within the team and spoiling it for everyone.

We have all worked with someone who is negative and, for the most part, we can keep our head down and do our job by basically ignoring their behaviors. The question is, do we really want to? I have said this many times in the past; today we are spending more time with the people we work with than waking hours with our own family. Doesn’t it make sense that we should all get along? More and more people are leaving their jobs simply because of a single team member or a boss who allows negative behaviors to continue – even if it is just one bad apple.

In almost every sport, if a team member is not contributing in every aspect of the game, they are either traded or dismissed. Keep in mind that I am not talking about a team member’s personality. I am talking about their behaviors such as displaying a negative attitude, not pulling their weight on the team, or constantly complaining. Let’s take a look at these three.

Negative Attitude
Have you ever worked with someone who could simply brighten a room by leaving? I like to call these people “Nega-Maniacs.” They simply suck the energy right out of everyone. For the most part, about five percent of the population tends to be negative. They actually look for something negative, or something that is wrong, or why something will not work.

Not Pulling Their Weight
Have you ever noticed that the people who talk about how busy they are, seem not to be nearly as busy as those who just do the work? Many years ago, during my previous life in the mortgage industry, I used to work with a loan processor who was always talking about how busy she was. Another processor never said a word and at the end of almost every month, the processor who never talked about being busy was able to process more loans, with fewer errors, than anyone in the office.

In chapter three of his best-selling book, “Good to Great,” Jim Collins talks about getting the right people on the bus, then getting them into the right seats. While this is absolutely essential, most people forget the next step – get the wrong people off the bus. We need to get the negative apples off our bus in order to promote a positive organizational culture.

One thing to remember is that most of these behaviors are not intentional, and these people usually do not truly mean to cause harm. They just need to be reminded what they are doing and, in many situations, their behavior will change. Unfortunately, the young woman who was in my workshop was part of the five percent who did not want to change.

Remember, you cannot change anyone; they must want to make a change. When someone does not want to change, they are that one bad apple.