No Coach … No Problem

Previous Next
No Coach … No Problem

Most people have participated in team sports at one point or another. While the skill set required may vary from sport to sport, there is always one common denominator: all teams have a coach, and in many cases, more than one coach. Look at the NFL, they have numerous coaches, even some dedicated to specific positions. Corporate America follows a similar structure; departments have team leaders, managers, senior leadership … while the titles vary, these roles are really just “coaches” of their respective teams. The military has a very specific chain of command that always includes a leader. Many of us rely on our team leaders and coaches for advice and development, direction and strategy. This entire concept begs a thoughtful question: what happens to a team without a coach? Well, let’s rewind a little bit.

It’s fall of 2010: High school senior Chris Munster, from College Station Texas, is evaluating colleges to attend the following year. He’s a strong, competitive swimmer so athletic programs and swim coaches all over the country recruit him. While many factors play a role, he ultimately chooses Wheeling Jesuit University, a West Virginia liberal arts school with just over 1,600 students. Not only does he really click with the swim coach, but he also wanted a smaller school with more of a close-knit, family-like feeling. 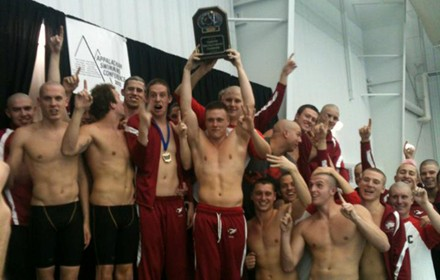 Chris bonded with his swim team right from the start, and the season started off strong. The team was led by the head coach who recruited Chris. The team practiced 11 times per week, and had meets during the weekends … a grueling schedule. As the season progressed, the head coach became less and less involved. While he did attend the meets, he was scarce at practices.

A post-Christmas training trip in Florida finally became the tipping point; after the last practice Coach gathered the team together in the weight room and said that due to personal reasons he would no longer be able to coach the team. The 19-hour bus ride back to West Virginia was an emotional one. The team felt disappointed beyond their comprehension. This is the person who had recruited each of them, and after half a season of half-hearted leadership, he had now abandoned them. So, now what?

Well, the team couldn’t dwell on this for long … conference meets started in a matter of weeks. Father Harry, one of the Jesuit Priests, acted as the team moderator, but wasn’t responsible for directing practices or strategy for the team.

Immediately upon their return to campus, President Rick Beyer and Fr. Jim Fleming, the University’s executive vice president met with the team. The message delivered was to acknowledge, that in life, we all will face difficulties, some caused beyond our control; how the team responds, is their choice. President Beyer and Father Jim counseled, that if the team chose to stay together, they could make this experience an important life lesson.

Things fell apart quickly; no one agreed on how to move forward and individual swimmers each reached out to their own mentors for advice and direction, creating even more chaos.

What happened next is where the story gets good … intriguing even. With Father Harry acting as the team moderator, the boys and girls came together and elected team captains. These captains quickly became leaders, organizers, motivators … they became coaches. But more importantly, others stepped aside, putting their pride aside and coming together to support one another. They ran their own practices and united as a team in the water daily. In many ways, everyone on the team became a coach and leader. Swimmers counted the split times for one another just like a coach would do. This was a huge morale boost for everyone, and they learned to trust and rely on each other in a very short period of time. It wasn’t easy … there were bumps along the way, and it paid off; the team came together to win their last regular season meet against their biggest rival. The conference championship meet was upon them.
The team left for the 2012 Conference Finals in Kentucky. The championship meet is a two-day format just like the Olympics: a preliminary day and a finals day. There are 10 events per day plus relays. Once all the men and women races end points are tabulated, the top two teams with the highest scores are the winners.

The team went into the meet with two mottos in mind: the WJU motto; “Individuals win races, teams win championships.” And their own personal motto: “No Coach, No Problem,” which they chanted in the locker rooms as personal motivation. And boy was it motivating. The Men won their third consecutive conference championship while relying on each other and the leadership from within. The Women’s team championship came down to a final race: the 800 freestyle relay. With the support of their teammates on the pool deck, the WJU Women pulled through and finished the race in 1st place to win their conference championship. And with that, Wheeling Jesuit University swim team – the team without a coach – had won both the Men and Women championships.