Previous Next
Employee Retention – How to Keep Employees Engaged

The day Paula waited for had finally arrived. After 30 years with one company, and hardly taking a single sick day, it was time for her to retire. She had enjoyed working, but now it was her time to enjoy life. After all, she and Tony, her husband of more than 26 years, had raised two beautiful children, each with a bachelor’s degree and employed with great jobs. Tony continued to work, not because he had to, rather because he still enjoyed the idea of getting up and making a difference in his position. The couple had just purchased a new home in a nice community, and Paula was ready to enjoy retirement, volunteering for various charities and simply puttering around their new home and making her mark on it.

Paula spent her final day at work receiving congratulations and reminiscing with her co-workers. When Robert, a much younger colleague, asked, “What was it like working in one place for over 30 years?” Robert had only been with the company for a year and this position was his third in less than six years in the workforce. Paula’s response was pretty simple, “I didn’t think about it. It’s just what we did.”

What is the average employee tenure in your organization? Companies today experience more difficulty with employee retention than in years past, and the idea of one employee staying his or her entire career with one company, organization, or agency, just does not happen as often as it used to. That’s not to say it never happens, because it does, and those organizations that keep their employees are doing something right. What is it? It’s not about the mission and vision statements hanging on the wall, or because the company values are reviewed once per year. The secret is in how the leaders lead, managers manage, and teams play. 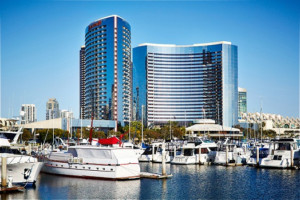 I recently spoke with Ray Warren, the General Manager of the San Diego Marina Marriott hotel. Ray has been with Marriott for 35 years. He moved 11 times in his first 18 years, and for the last 17 years, he has been with this one hotel. His executive team has an average tenure of over 23 years. I wanted to discover the secret to keeping employees, and keeping them happy.

“There is a culture that began many years ago with Mr. Marriott’s father (J. Willard Marriott) and that culture is a very thick and very real thing,” Ray said. “This is the glue that keeps many of these people together and it is a very powerful thing. The culture is not likely to change, as it is embedded into the various units within all of Marriott.”

When Ray speaks to new associates at the orientation meetings every other Friday, he talks about the culture, and how amazingly well they articulate what the culture is all about and how it is likely different from other places they might have worked. He continues to describe it as a very ‘fundamental thing.’

It all started with Mr. Marriott Sr. He chose people he felt had a ‘Spirit to Serve’ and then he treated them well. He truly cared about them. “That old philosophy of “if you take care of your people, they’ll take care of the guests, and the guests will keep coming back.” As hokey as it is, it’s alive in our hotels,” Ray said.

One of the key ways to retain employees and keep them happy is to continually engage them, ultimately allowing them to grow within the company. Ray said that, when looking to move an hourly employee into a management position, technical skills represent only about 30 percent of what he looks for. Instead, he looks at the attitude and the ability to be an entrepreneur. He said, “They need to feel like they really own it themselves.”

At the San Diego Marina Marriott Hotel, the executive team meets twice per year to prepare a human capital plan to predict which positions they feel may open up in the next 6-12 months. In these meetings, the executive team proactively discusses who would fit the position, and how that person can improve and prepare himself or herself for the position before it even comes available. This is followed up with two formal reviews per year – with every leader – where it is determined what the employee needs, from a leadership standpoint, to prepare himself or herself for the potential promotion.

While many organizations practice this ‘succession planning’ at the senior level, very few implement the method among front line employees who want to move into management. In the Marriott organization, the leadership team actively observes employees to see how they take on a task as well as how they perform at the task. Rays says you will actually see who the natural leaders are.

One interesting way Ray’s team evaluates potential candidates is by hiring college students into hourly, administrative positions, and having them work alongside specific meeting planners. This way, management can see how well they interact with customers and, in essence, this is a mini-leadership position where the students don’t even realize they are being interviewed.

I also asked Ray about teamwork and how he teaches the culture of teamwork. He said, “It is a bazillion touch points of embedding that you really care about the person next to you, whoever it is. It is done in every imaginable way, from a simple “thank you”, to the daily team (huddle) meetings, to one employee encouraging another to tell the story of how he did something incredible for a guest.”

Ray added, “People don’t leave a company. They usually leave a boss because the boss was not stimulating them or responsive to their needs.” Ray and the executive team want to know if their managers have a relationship that goes beyond the business aspect with EVERY single one of their team members. If the manager says yes, the family spirit is present and that is incredibly powerful.

The concept of employee retention comes down to one simple fact: Management does not spend a lot of time making decisions as leaders, but rather asking the team what should be done to solve the problem at hand.

On a personal note, I have spent many nights at this property over the last several years, and the teams in every department are powerful. Ray had been so kind on these trips that I wanted to give him a small gift. So, on one trip I asked a bellman what Ray’s favorite restaurant is, and he knew exactly where to send me. The key point here is proof that relationship building works in both directions.