There is a surprising amount of misinformation and assumptions out there about effective teamwork and creating & maintaining an effective team. Leaders who believe these myths can actually hamper team cohesion. I’ll lay them out here.

Myth 1: Teams are always self-directed
While a team can become self-directed over time, it is never automatically self-directed. And it doesn’t often stay self-directed for long. I’ll use the committee as an example. Committees are teams with a specific expected outcome. They often take orders externally and often have specific tasks and parameters given to them. Once the outcome is achieved, the committee may disband. Even teams on long-term projects that have routine or regular tasks to accomplish will need specific direction and guidance at various intervals. Setting a team to a task and sending it in a specific direction is fine, but don’t expect it to automatically direct itself. 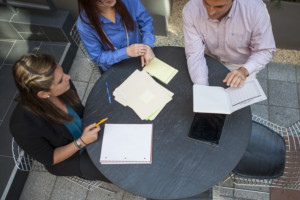 Requiring absolute participation in a team can be a disastrous mandate for a team leader. After all, team members have free will, and if they don’t want to do something, they won’t do it. An example might be where a new team member has a flex-work arrangement where he works from home 1 or 2 days a week, but the team leader wants everyone on site, every day during work hours. If the team member accepted this job with the flex-work understanding in place, requiring him to be in the office every day can create tremendous friction. Ideally, if you’re the team member being affected by a mandate, it’s best to approach the team leader respectfully to discuss the issue. If you’re the team leader, listen to team members’ concerns about new work implementations.

Myth 3: Employees always want to be empowered and to work as teams
Not every employee is enthused to hear they will now be working as part of a team. Some employees prefer working alone. And refer to Myth 2 above: leaders can’t make an employee follow a mandate if that employee doesn’t want to. Of course, in some workplaces team leaders get little say as to who is placed on their team. In other companies, team leaders can pick every member of the team. The latter is ideal because a team leader can bring on team members who will contribute to and participate in the team’s success. The former is more challenging, especially if one or more team members prefer working alone.

Myth 5: Work teams are free or cheap
When was the last time that anything worth having was free? The same applies to great teams.

Myth 6: Work teams always produce error-free work
Teams are made up of people, and mistakes happen. If you want to be a great team, don’t worry about the possibility of someone making a mistake. Instead, when a mistake or error happens, focus on what went wrong, NOT who messed up. Correct the error if you can, and look toward the future, discussing what the team can do to prevent the mistake from happening again.

Myth 7: Work teams are new
Companies have been discussing work teams as a formal idea since at least the 1920s. The Hawthorne Studies helped formalize the concept of teams in the workplace—naturally, teams had been around probably since hunter-gatherer times, but the studies looked at what made teams tick, and the common traits of successful teams.

Avoid perpetuating these myths about work teams and you’ll open the way to better team cohesion.