Because Good Days are for Average People…

Previous Next
Because Good Days are for Average People…

Are you an average person?

When you have a conversation with someone, whether personally or professionally, how do you typically end the conversation? If you are like most of the people you will say something like, “Have a good one.” Or perhaps, “Have a nice day.” Occasionally I will hear, “Have a great day!” Or, on a very rare basis, I might hear, “Have a wonderful day!”

My question is, when you end a conversation like this, are you being sincere? Is the other person really listening to you? Is this just a habit we have fallen into?

Recently, I delivered four training sessions to seasonal employees of a resort which included team members from a wide array of ages and backgrounds. After one of the sessions, a young woman who has worked there for the last three years during her summer break from college said to me that she really enjoys working for one particular manager because she feels that this one manager genuinely cares. She said that she hopes to be that kind of manager one day.

My challenge to you – and your team – is, for the next two weeks, to pay very close attention to how other people end their conversations with you. In fact, if you can, take a few minutes each day and create a journal or log of what people say.

After your two-week research project is complete, have a team meeting and compare the responses and take note of the trends. I am not just talking about the workplace; this can be done everywhere you go. Do not keep track of who makes the statements, just the phrases they use. In some cases some people may simply say, “Thanks and good bye.” This is totally acceptable.

With that in mind, think about what you say when you end your conversations. Those who know me know that I almost always end my conversations with something different – it could be “Have an awesome day!” or “Make it an amazing day!” Sometimes, I have been known to make up words and say something like, “Have a fantabulous day!”

Sometimes, when a person says to me, “Have a good one.” I reply with, “I don’t want to.” That catches them off guard and they usually ask, “Why not?” I tell them I don’t want to be limited to just a good day and that I would rather have an awesome day. I then tell them that good days are reserved for average people and I know I am not average. Some people may take this as being arrogant or self-absorbed – I like to think of it as being confident and hoping to open others up to a more positive day and place a smile on their face.

While on a recent business trip, I found myself engaged in a conversation with another hotel guest and we talked about this for several minutes. He was fascinated with my thoughts and, when our conversation ended, I told to him to have an awesome day and he did likewise. About 45 minutes later, we passed each other in the lobby of the hotel and chatted again for a minute. As he left, he said, “Have a good one.” When I reminded him of our conversation, he smiled and said how hard it was to make that simple little change and thanked me for reminding him. As we parted company once again he said, “Have a good one.” and again, I called him out on it. We both had a great chuckle. For some reason we ran into each other about an hour later and this time he smiled and energetically said “Have a wonderful day!” Not only did he change the words he used, his energy level was stronger and he had a little more swagger in his step. I could tell he truly meant what he said.

Now, the trick here is to say something that you are 110% comfortable saying. For example, the television commercial for Citibank where a mom is purchasing a gift for her daughter and the cashier says, “Have a super sparkly day!” is not something I could say. Perhaps you could.

I encourage you to develop a list of words that you are comfortable with to replace “good” or “nice.” The chart below displays 21 words that I have actually used. You could create a list of just seven words, one for each day of the week, and rotate them. These then become your words and help define who you are. One of my mentors and coaches, Joe Gilliam, used to always say, “Have an excellent and exceptional day.”

The idea is not to become complacent or become generic or, more importantly, not be sincere in your comments. This practice will set you apart from the dull, the boring, and the mundane and you might actually make a difference in someone else’s life. In turn, your day and your life will become more fulfilled and you will begin to create a culture where people are more positive and willing to help each other. 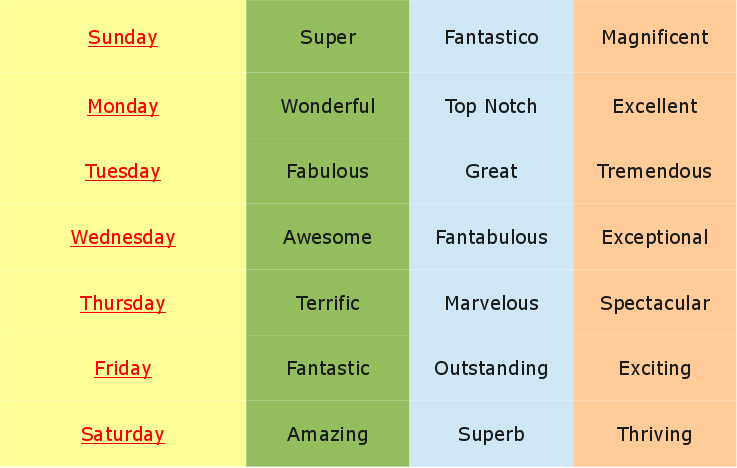